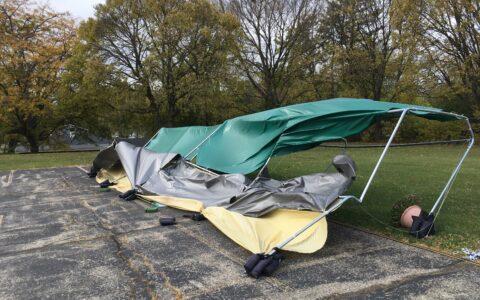 I know, it’s only been a couple of weeks since the last issue of The Beacon went out, but a lot has happened since then and let’s not overlook the minor miracle of The Beacon going to press before the end of the previous month. First, I’m happy to report that I received my second shot of the COVID-19 vaccine on Monday. In a little over a week, I’m going to feel a lot better about calling upon people and about working alongside our worship crew, including pianist, Margot Downey, song leaders Jen and Christyn, and tech helpers Robb and Lorraine. Once again, I urge any of you who are still undecided about vaccination to talk with your doctor about the right decision for you.

Also, we’re busy getting ready for what’s next, including a path back to indoor worship. The return of reliably warmer weather means that we can return to worshiping outdoors. But, wait a minute… Didn’t our outdoor ‘chancel’ get destroyed in a gust of wind in October?

Yes, it did – and the damage was so significant that we were SURE it was a total loss. Before we scrapped it and spent several hundred more dollars on replacements, I asked Len Pergander to take a quick inventory of what was actually damaged and what was salvageable. As someone who helped both construct the tents and clean up the wreckage with me, he responded with an ‘okay’ that resembled the one the disciples gave to Jesus at the wedding in Cana when he told them to bring him some water. A couple days later, Len gets back to me with the report. It’s not as bad as he thought, but it’s still pretty significant: 10 of 12 roof poles, a handful of legs, and various smaller parts. I recalled that the seller had been rated very highly for replacing damaged parts, so I went back to see if it would be possible to order replacements. When I went back to the website, I saw that they warrantied their poles for a year and the directions on how to contact them for replacements. I explained the situation and sent photos of the damage. I said that naturally I didn’t expect replacements under warranty, but if there was anything they could do to keep the costs down, that we’d appreciate it.

The reply came back pretty quickly. First, they couldn’t believe that we needed that many roof poles. I explained that we had TWO tents. Second, after verifying what parts we needed, they’d be unable to replace them for free, but would see what they could work out. The only thing was that it was the weekend and I’d have to wait until Monday to find out how much it would cost. The replacement cost of the tents themselves had gone up – a lot, almost 50% to $299 from $209 less than a year ago. All that remained was to wait and pray.

In the midst of all of this, one member approached me about making a special donation of their stimulus check so that we could purchase the equipment we’d need to set up a ‘second unit’ outdoors (I’m getting so Hollywood now!) – whatever we needed to set up for streaming outdoor services without having to haul equipment to the church building. It was a brilliant idea backed up with a generous act. I soon started looking for used cameras and other stuff I needed from the bargain bin in order to make setup easy and result in a reliable, high-quality broadcast.

On Monday morning, I got the response from the tent seller. Would $20 total be okay for all of the parts we needed, shipping included. Yes. Yes, that’s more than fair. Thank you. From all of us.